Drinking an ice-cold refreshing citrus-flavored carbonated drink can transport an individual from a hot summer day to a cool spring day, albeit in mind only. This is the case for drinkers of Fanta, a fruit-flavored carbonated soft drink known worldwide – and there are over 100 distinctive flavors around the world, to boot!

The story behind the creation of Fanta is both practical and whimsical. This was a product created in response to a problem, particularly the absence of ingredients needed to make Coca-Cola, but it was named after the German word for “use your imagination” (i.e., fantasie). The combination definitely makes for a great story whenever the origins of the world’s most popular soft drinks are being discussed.

Below are the latest Fanta prices. 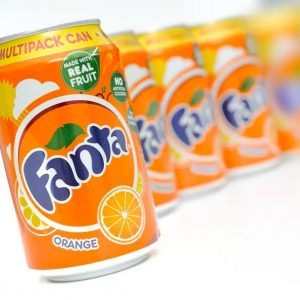 During World War II, the Coca-Cola Deutschland (Coca-Cola GmbH) plant was cut off from its international headquarters in the United States due to a trade embargo against then-Nazi Germany. As a result, the ingredients for making Coca-Cola was unavailable but Max Keith, Coca-Cola Deutschland’s head, decided to do something about it.

He decided that a cola substitute should be made from whatever available ingredients were present in Germany at the time. These ingredients included apple pomace and whey, which Keith called the “leftovers of leftovers”.  The Fanta formula was created but it didn’t have a name yet – and this is where happenstance had a good result.

Keith was in charge of a brainstorming session for a name but there were no catchy names being offered. He then started telling his team members to use their imagination, and Joe Knipp answered “Fanta!” The name has been used since then, which isn’t surprising as it’s easy to pronounce and sounds like fun.

Even during the war, Fanta had different versions because the local plants used whatever ingredients were available. Since N.V. Nederlandsche Coca-Cola Maatschappij, the Coca-Cola plant located in Amsterdam, were also adversely affected by the war, Keith also allowed it to use the Fanta brand and formula at its disposal. But the Dutch version contained elderberries as the main ingredient so the recipe was different from the German version thus resulting in different flavor profiles.

When the war ended, the production of Fanta in both German and Dutch plants was discontinued after these branches were reunited with the U.S.-based parent company. But the Fanta formula and trademarks remained with the parent company until such time these were needed.

And it was soon needed! Coca-Cola re-launched the brand in 1955 in response to the launching of several new drinks by PepsiCo in the 1950s. Due to its aggressive marketing plans, the Fanta brand soon became a well-known soft drink in North America as well as in South America, Europe, Asia, and Africa.

At its core, Fanta is actually a yellow-colored lemonade.  The original drink was made from whey and apple fiber, both of which were byproducts in the manufacture of cheese and apple cider.  But its actual flavors differed depending on the availability of ingredients, thus, the German and Dutch versions during the war.

The original German version had a yellow color, as well as distinctive flavor from what we now know as Fanta Orange.  Today, the number of flavors worldwide feels like a trip through the local culture because local ingredients are also used in their production.  This is apparently a homage to the inspiration behind its creation – use whatever ingredients can be used, a case of when you have lemons, make lemonade.

Most of these flavors are only available in certain countries, too.  Fanta Shokata, a drink based on a traditional Romanian drink, has elderflower as one of its ingredients.  This is available in Romania, Albania, Serbia, Croatia, and Bosnia & Herzegovina, among others. The name itself is a play of the words “soc” (i.e., elderberry) and “shock”.

In Switzerland, Fanta made with blackcurrant is available. In Canada, there’s Orange Fanta with tangerine juice, which differs from the European and American versions – in the European version, it has orange juice, while the American version has neither tangerine nor orange juice. The flavor profiles are the different although the citrus flavors are common to all these variations.

Canada also has the Cream Soda and Grape versions, both of which are made from real grapes. The Kolita version was previously available in Central America from the 1980s-1990s, as well as still being available in Costa Rica and El Salvador.

Here are a few more interesting trivia about Fanta.

Fanta has its share of competitors, too, but it has held its own ground.