The refreshing taste of 7 Up is what makes the brand of lemon-lime flavored soft drink among the most popular in the world today, notwithstanding the stiff competition from other similar beverages. The energizing feeling that comes after drinking it is, fortunately, not from caffeine but from its citrus-flavored fizzy quality.

Below are the latest 7up prices. 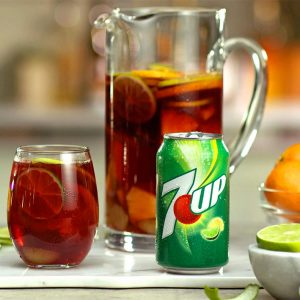 The rights to the 7 Up brand are held by two corporate entities – Dr Pepper Snapple Group in the United States and by PepsiCo including its authorized licensees outside of the country. There are usually also different versions of the logo and bottle design, as well as a different set of flavors, in different regions around the world but the refreshing lemon-lime flavor remains. For example, the 7 Up logo in the United States feature a red circle bisecting the words “7” and “Up” with the red circle becoming the inspiration for Cool Spot, the brand’s mascot.

Charles Leiper Grigg created the original 7 Up formula in 1929 but it was then known as Bib-Label Lithiated Lemon-Lime Soda. He was also the founder of The Howdy Corporation, a St. Louis-based company, which was established in 1920. The soda was created just before the 1929 Wall Street Crash so its future in the soft drinks industry wasn’t guaranteed.

But the 7 Up brand has managed to maintain its popularity despite the inevitable ups and downs of the soft drinks industry, especially with the changes of ownership. Among its previous owners are Westinghouse (1969), Phillip Morris (1978), and Hick & Haas (1986) while its current owner, as previously mentioned, is Dr Pepper Snapple Group since 2008.

Fans of the contemporary 7 Up drink will not recognize the original formulation of the soft drinks because of the numerous times it has been reformulated. This is aside from the wide range of flavors available under the 7 Up banner, most of which are based on the current formulation except with different levels of carbonation and sugar (i.e., diet).  There are also flavor variants, such as cherry and orange, which combine the original lemon-lime flavor with added flavors.

In the United States, the reformulated soft drink (2006) has been labeled as “100% natural” due to the removal of calcium disodium EDTA, a chelating agent, and the replacement with potassium citrate of sodium nitrate. The latter ingredient substitution reduced its salt (i.e., sodium) content. The drink, however, contains high-fructose corn syrup (HFCS) as a sweetener instead of fruit juice so it was subsequently relabeled as “100% Natural Flavors” partly due to pressure from advocacy groups.

The lemon-lime flavor has a refreshing, almost rejuvenating, quality to it especially when it’s consumed cold as ice or with ice cubes.  The citrus flavors leaves a fizzy feeling in the palate with the tiny bubbles exploding like splashes of icy water on a hot day.  The coldly invigorating feeling even extends to the throat, almost like an icy hand caressing warm skin to make it cooler.

As previously mentioned, there are several flavor variations including but not limited to the following:  (A few of these flavors have been discontinued or may not be available in certain countries)

These flavor variants are bestsellers, too, among families.

The origin of the name “7 Up” isn’t clear although there are several theories. First, it’s thought to come from the pH level of the soft drink – over 7 – but tests have shown that it has approximately 3.79 pH level.  Second, it may have something to do with the seven main ingredients. Third, it may be in reference to the atomic mass of lithium (i.e., around 7), one of the ingredients in the original formula.

But no matter the name’s origins, we definitely prefer it over its clunky original name, especially as it included the ominous-sounding term “lithiated in it. Lithium was widely used for its mood-elevating properties in the 1920s before it was used for bipolar disorder treatment later on.

7 Up is also catchier than Howdy, especially when there are so many ear-friendly brands during its launch; in 1929, there were actually more than 600 soft drinks with lemon and lime as their main flavors.

And the soft drink is among the few that can actually be used in the kitchen! There are dozens of recipes using 7 Up from pound cakes and biscuits to jelly salads and shrimps.